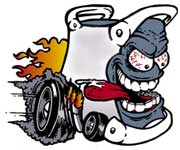 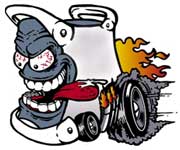 Okay, you're feeling used right about now. You bought the Yikes and now Apple is selling a Sawtooth for the same price.

Or you're ready to buy a G4 system and you saw a closeout special on the Yikes G4/400. You are wondering if it's a better deal than paying $500 more for a comparably equipped Sawtooth G4/400 from the Apple Online Store.

Never fear, Bare Feats is here with some test numbers to ponder:

(A Photoshop scrolling test is usually included
but there was no significant difference in speed between the 5 graphics boards.)

Conclusion: Okay. I'll say it. "The King is wearing a bikini." The Sawtooth was 24% faster on average but costs 33% more (both models stripped*). The Sawtooth costs 25% more if you compare both machines with 20 Gig drive, 256MB of RAM, and a Voodoo3 board. All things considered, you should probably buy a Sawtooth.

If you already bought the Yikes, like me, take heart. At least you can fiddle with the jumpers or replace the ZIF cpu with something meaner and faster some day soon. Keep reading...

Other Analysis & Opinion: One thing disturbed me as I compared the two machines. When the same components were used in both machines, the speed difference dropped dramatically.

For example, the Sawtooth is supposed to have an Ultra-ATA/66 interface versus ATA/33 on the Yikes. Ooo, I'm impressed.... until I put the same hard drive on both systems and saw only a 5 to 11% difference in speed. Hmmm.

It seems that the components (disk drives, graphics cards) are the limiting factor these days, not the interface speeds.

Reader Feedback:
"How does the G4/400 Yikes compare to a G4/350 Sawtooth?" Funny you should ask. I'll be testing the 350MHz Sawtooth in a few days. If I was guessing, I'd say they would about the same speed in most areas.

...Metacreations for the use of Bryce 3D