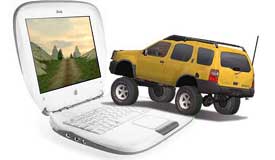 Which Is Faster,
The New 466MHz "FireWire" iBook SE
or the 400MHz PowerBook Pismo?
And Which Is The Better Buy?

I'm starting to get email asking, "Should I buy the new iBook SE with FireWire and 466MHz G3 750cx or get the PowerBook (Pismo) 400MHz? Won't the iBook be faster?" I decided to run some real world CPU tests to see how they compared.
(I used a RED bar in the graphs to indicate which of the two laptops was faster on a given test.)
First, Some CPU Tests

What About 3D Games?

The iBook SE 466Mhz won three out of four CPU speed tests but they were neck and neck. Oddly enough, the iBook 466 ran faster at the higher quality setting while the PowerBook Pismo 400 ran faster at lower quality setting. Neither one will win any gaming fans, especially when you consider a G4 Minitower with an Radeon card gets 55 frames per second in the 800x600 32bit mode. Ę

What's most amazing is that the PowerBook 400MHz Pismo did so well when you consider the fact that it was giving up 66MHz. How is that possible? It's technical.

You see, the newest iBook uses the 750cx G3 chip with 256K on-chip level 2 cache running at the same speed as the cpu (466MHz). The PowerBook Pismo 400 has 1MB of backside level 2 cache running at 40% of CPU speed (160MHz). Here's the rub. If the iBook goes to execute an instruction that didn't fit in the 256K cache, it has to go looking for it on the 66MHz bus. The Pismo stores more instructions in its 1024K cache. Even if an instruction is missing from the Pismo's cache, it goes looking for it on a 100MHz bus. The net result is what you see in the above graphs: a 466MHz iBook is roughly equivalent to a 400MHz Pismo in overall performance. (According to an article on Low End Mac, IBM's own published SPECint95 benchmark results show a 450MHz 750cx G3 with 256K on-chip L2 cache is equal to a 400MHz 750 G3 with 1024K backside L2 cache.)

Even though they don't exist yet, it's technically feasible to create an upgrade for the Pismo (like a faster G3 or even a G4), but the iBook is a dead end with its soldered cpu.

BOTTOM LINE: If I was choosing between the iBook 466 SE and the PowerBook Pismo 400, I'd choose the Pismo without blinking an eye. Why? Read on...

The Pismo wins hands down on features.

MacHardware has an articles on "...Who Should Buy an iBook and Who Should Choose a PowerBook." and "Advantages of the PowerBook Over the iBook When on the Road."

Low End Mac reviews the new iBook with 750cx and FireWire. And the editor, Dan Knight, discusses the 750cx G3 versus the 750 G3.

Bare Feats tests the G3/466 upgrade for the PowerBook Wallstreet and Lombard.

Need a small, thin, portable FireWire drive for your iBook or Powerbook? Bare Feats tests three to see which is fastest.

A proposed prototype of the G4 PowerBook.

Does your PowerBook need a bigger, faster drive? Accelerate Your Mac tests two of them and shows you how to install them.

Where Do I Buy This Stuff?Ę

Get the G3/466 PowerBook upgrade for Wallstreet or Lombard at Newer Technlogy.

Want to know about fast, portable, FireWire external drives? Read all about it.

Maxon Cinema 4D 6.1 is a NEW REAL WORLD TEST I've just added. It's a 3D modeling application. Cinema comes with various example documents. I used the "scene0.c4d" document from their Cinebench 2000 benchmark. I invoked RENDER (Shift + R). It keeps track of the rendering time to the nearest whole second. (A DEMO version of Cinema 4D is available on their website as well as a copy of Cinebench 2000.)

I used the newest 2.01 version of Apple's iMovie. I ran the "render titles" function as a test since it's so CPU intensive. I typed in a two line title ("My Great Movie by rob ART mog") using default settings. Then drag/dropped it in the "story line." I used a stopwatch to time how long it took to render the 188 frames. (You can download a copy of iMovie 2.01 from Apple's web site for $49.)

Casady & Greene's SoundJam MP Plus 2.5.1 was used to convert a 2.5 minute music selection into MP3 using default settings. With a stop watch, I timed it to the nearest tenth of a second. (A DEMO version is available from their website.)

Corel Bryce 4 rendering was used to test a combination of CPU and FPU speed. I use a document I call "Rock Island," a crude creation of my own. (When Corel bought Bryce from Metacreations, they stopped posting a DEMO version. However, if you own Bryce 4.0, they have posted a 4.1 update.)